When one takes a trip

As the saying goes, if someone goes on a trip, then he can tell a story. Such a tale we will also have in the future from our honeymoon. On the last morning in Klein Aus Vista Martin lost his crown from his tooth during breakfast. Since the weekend was just around the corner and we actually wanted to dive deeper into the remoteness of the Namib, we spontaneously asked at the reception for a dentist. Typical Namibia – the nearest dentist was in Keetmanshoop, over 200km away. So we changed our route, had our tooth mended by Dr. Smith in a competent and friendly manner. Besides the repaired tooth, one or the other Namibian gem should also be the reward for the detour.

A Namibian gem is the Alte Kalkofen lodge, which offers both bungalows and three rustic, natural campsites. Due to our spontaneous route change, we tried our luck here. And should be rewarded again with a campsite all to ourselves. The lodge is a perfect shelter if you are on the way to the Sossusvlei. A special feature are the living stones, so called Lithops, which are cultivated there. They are a genus of succulent plants that the lodge operators grow and then plant out in the area.

The next day we continued towards Sesriem – Sossusvlei. Due to the detour via the dentist in Keetmanshoop, the drive was now much longer, so we wanted to make another stopover. Our first choice of campground was actually fully booked – this was a first on this trip (although with 4 campsites it can happen quickly). So we drove on through the region and spontaneously decided on Greenfire Desert Lodge. Again luck was on our side – and we were to find the next gem. A beautiful campsite set in the middle of huge boulders, just waiting for us. So once again we could spend a quiet night alone under the stars and the milky way. Only an oryx passed our camp over the mountains at night.

A special highlight on the way to this campsite was the sighting of young bat-eared foxes. These very playful fellows surprised us unexpectedly at a gate – and let themselves be disturbed only conditionally by our photo joy. Pure nature in the middle of the desert. 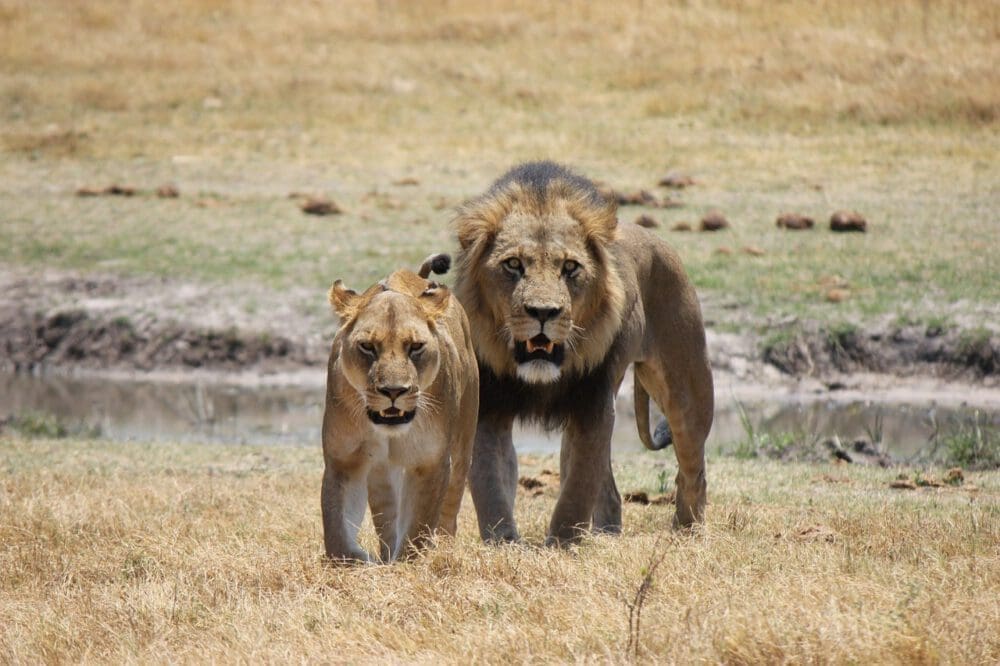 The great safari honeymoon to Namibia

After the wedding traditionally follows a honeymoon. The destination was clear – Namibia! But how to plan a honeymoon as a self-drive camping safari in the current time? How do family and friends react to such a plan? How unproblematic is a trip to Namibia in times of COVID-19? Curious?…
Read More 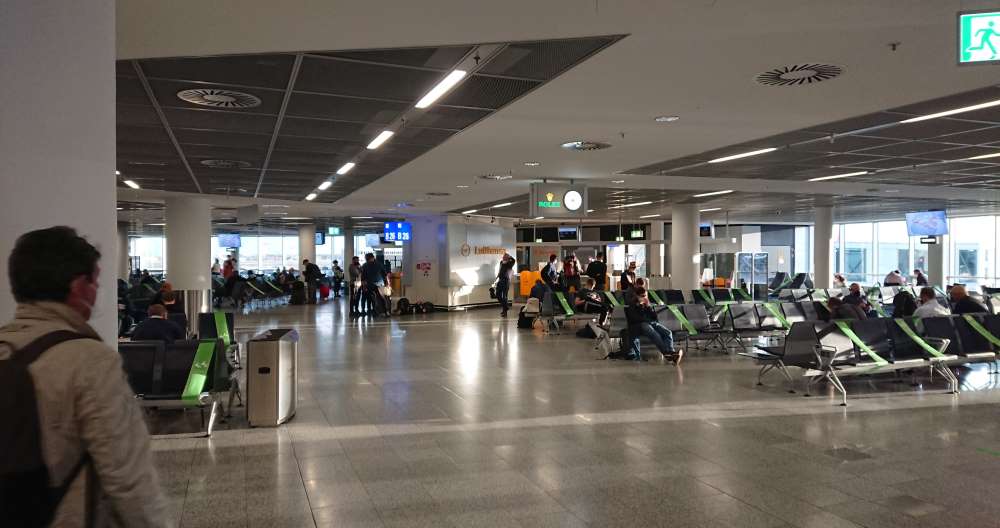 There are always two parts to traveling. The journey to the destination and the journey itself. With Namibia as a destination, the destination country is first considered safe. However, a flight is inevitable. This brings us to the point where many currently have reservations. But what is flying really like…
Read More

Windhoek – the first week of the trip

Almost every Namibia trip starts in Windhoek. So did the big safari honeymoon. However, in addition to the usual things that every other traveler experiences, there were a few more items on our itinerary. In sum, enough to spend a complete week in Windhoek. What exactly – you can read…
Read More

Let’s go to the Kalahari Desert!

After spending our first week completely in Windhoek, it was time to go on the actual trip. According to our plan, the route should first go south. After a drive of about 3 hours on the well paved B1 we reached the Bagatelle Kalahari Desert Ranch near Mariental. Our first…
Read More

After a very nice start in the Kalahari, our route takes us further south. Near Keetmanshoop the next special features of southern Namibia are waiting for us. quiver trees, dolorite formations, as well as mesosaurus fossils unknown to us so far. In short, fascinating landscapes with exciting details awaited us…
Read More

With all the beautiful experiences of the past days in our hearts, we continue south to the region of the Fish River Canyon. Here the way leads through a stony lunar landscape, in which one can see continuously new rock formations. Our hope was to find the canyon still filled…
Read More

In the next part of our honeymoon, we traveled further west towards Lüderitz and its surroundings. In this area, the traces of the German colonial period can still be seen in many places. Here our starting point should be the Klein Aus Vista Lodge, which is located a good 100km…
Read More

As the saying goes, if someone goes on a trip, then he can tell a story. Such a tale we will also have in the future from our honeymoon. On the last morning in Klein Aus Vista, Martin lost his crown from his tooth during breakfast. The weekend is coming…
Read More

Water in the Namib – Sesriem and Sossusvlei

After a long period of drought, Namibia was blessed with a very good rainy season in 2021. Until now, we were lucky to find water even 3 months after the heaviest rains. Therefore, we cherished the hope to also experience water in the Namib. We should not be disappointed -…
Read More

The next destination was Swakopmund and its surroundings. On the one hand, after the heat of the Namib, it was time for a little cooling down at the sea. On the other hand, it was an opportunity to meet the founders of the Dusty family and especially Carlien, the youngest…
Read More

Following our time with the Dusty Family, our next destination was refreshment at Ongongo Waterfall. We discovered this wonderful place very close to Warmquelle a few years ago for ourselves. And so it was clear that the honeymoon had to include a few days of leisure including refreshment at Warmquelle…
Read More

A week in Etosha National Park

After the exciting animal adventures in Etosha National Park, we were looking forward to some relaxation and especially hippos up close at the Kwando River! Arriving in Kongola, a super friendly and well prepared campsite manager Roxy was waiting for us. The Bush Camp by Camp Kwando is a brand…
Read More

Okavango River – Lizards and gray giants in the water

The watercourses around the Caprivi offer a lot of leisure to relax. So we made our way from the Kwando River to the Okavango River, where many lizards and gray giants awaited us in the water. The Mahangu Safari Lodge is already very familiar to us from various other safaris…
Read More

After relaxation and water, it was now about experiencing traditions and pure nature. To do this, we first had to drive back the entire Caprivi. Due to the extreme rainfalls, crossing the Khaudum National Park with only one car would have been too risky. Our destination was the Elephant Song…
Read More

As we near the end of our honeymoon, it’s time to take a closer look at African wildlife and restore some hope to abused or injured wild animals. We are talking about the Harnas Wildlife Foundation, also known from television as the orphanage for wild animals. This organization, which has…
Read More

For the last stop of our honeymoon we chose Duesternbrook, the first guest farm in Namibia. It is located just outside of Windhoek and thus offers total peace and pure nature. Just the right place to slowly get used to civilization again after a few days or even weeks in…
Read More
Categories:Tags: honeymoon safari 2021self drive Namibiatravel namibiatravel safety

We use cookies on our website to give you the most relevant experience by remembering your preferences and repeat visits. By clicking “Accept All”, you consent to the use of ALL the cookies. However, you may visit "Cookie Settings" to provide a controlled consent.
Cookie SettingsAccept All
Manage consent

This website uses cookies to improve your experience while you navigate through the website. Out of these, the cookies that are categorized as necessary are stored on your browser as they are essential for the working of basic functionalities of the website. We also use third-party cookies that help us analyze and understand how you use this website. These cookies will be stored in your browser only with your consent. You also have the option to opt-out of these cookies. But opting out of some of these cookies may affect your browsing experience.
Necessary Always Enabled
Necessary cookies are absolutely essential for the website to function properly. These cookies ensure basic functionalities and security features of the website, anonymously.
Functional
Functional cookies help to perform certain functionalities like sharing the content of the website on social media platforms, collect feedbacks, and other third-party features.
Performance
Performance cookies are used to understand and analyze the key performance indexes of the website which helps in delivering a better user experience for the visitors.
Analytics
Analytical cookies are used to understand how visitors interact with the website. These cookies help provide information on metrics the number of visitors, bounce rate, traffic source, etc.
Advertisement
Advertisement cookies are used to provide visitors with relevant ads and marketing campaigns. These cookies track visitors across websites and collect information to provide customized ads.
Others
Other uncategorized cookies are those that are being analyzed and have not been classified into a category as yet.
SAVE & ACCEPT
Powered by